Conquer Temple of Seal and Be a Master of Seal

Heroes are the strongest allies for warriors to achieve glory and riches. Now you can make them stronger than ever with a whole new PvE mode - Temple of Seal and a new Feature - Seal Cultivation, which are coming with Update 3.16. In Temple of Seal, players will be able to engage in PvE battles only with their Heroes for cultivation resources and strengthen their Heroes, plus, unlock unique skills for them with the Seals.
Check out all the heroes you’ve obtained and start planning your tactics. Will you be a master of Seal and imbue your Heroes with the most fascinating powers??

Requirement: Lv. 60 and above
Entry: Click on the “Feature” button and find “Temple of Seal” to enter.

Overall Description for Temple of Seal
Players will select their Artifact, Mythic and Legendary Heroes to challenge 15 PvE stages for great rewards. All the Heroes in Temple of Seal have specific initial attributes based on their quality. Please note that your own character cannot be deployed. 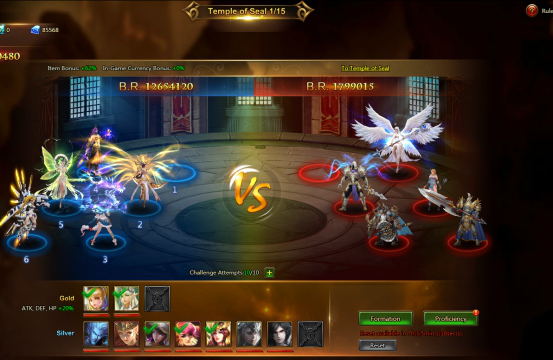 Prior to Challenge: Set Formation
Before challenging the stages, the first thing players need to do is to decide which heroes they want to deploy. There will be two categories of slots- Gold and Silver, each having 3 and 8 hero slots, respectively. Only Artifact heroes can be put into the Gold category and those Artifact heroes will increase extra attribute bonus by 20% namely, on their ATK, DEF, and HP. However, the slots under Silver category are open to all Artifact, Mythic, and Legendary heroes. 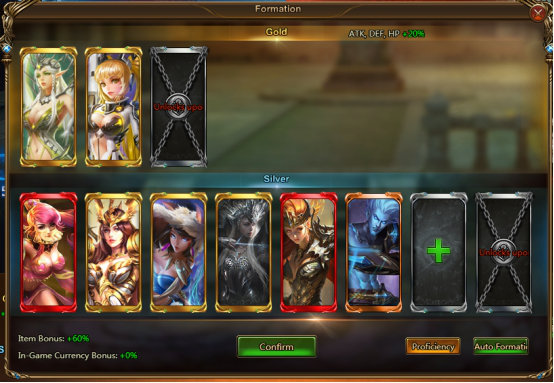 Note:
* Deployed heroes' attributes and BR are only determined by their qualities. The system will grant each hero fixed attributes. Heroes' BR are only determined by their own attributes and skills and aren't affected by mounts, battle pets, minions, runestones, etc.
* 5 Heroes can be deployed at most to clear the stages.
* Heroes can ONLY be selected before challenging the stage. Therefore, players need choose wisely before they decide to challenge. 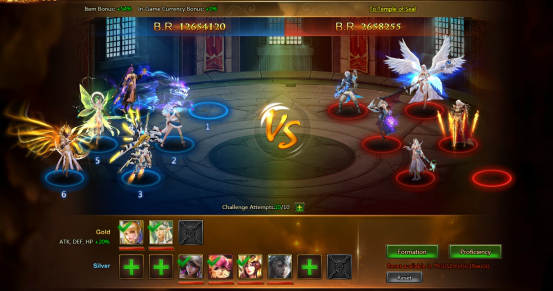 Other details about Reset:
1.There will be a daily reset after 0:00 AM. After reset, players can change the heroes by clicking the Formation Tab. Also, the stage will be reset and players can either use Blitz function for those cleared stages for more rewards or challenge from the 4th stage, which is based on which stage players have cleared the previous day.
2.Heroes and their HP will remain the same as they were the previous day upon reaching the same level.
Note: If players click Reset during the challenging period or before the reset time, then the stages will drop 5 stages.
Challenge the PvE Stages with Deployed Heroes
When heroes were deployed, players can start to challenge the stages by clicking the “VS” button. There will be 10 FREE attempts for EACH stage Clearing a stage will grant player awesome rewards such as Proficiency EXP, Seal Voucher, Seal Stone, Seal Shard, and Skill Points for Proficiency. 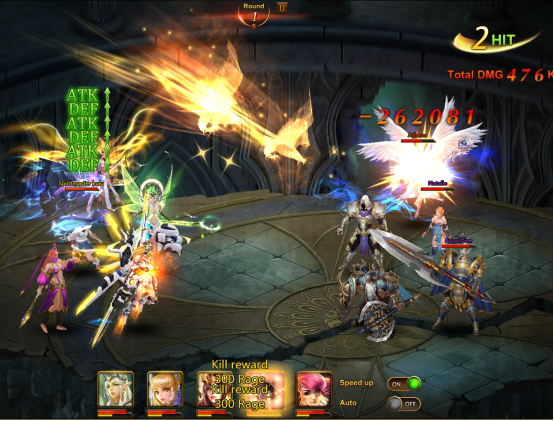 Proficiency: Grants you Extra Skills
When players open the “Proficiency” interface, they can learn more skills for more attribute bonus or item bonus, the bonus will only take effect during the battles in Temple of Seal. Learning a skill requires one Skill Point. Each leveling up on Proficiency will grant one Skill Point to activate one skill. Thus, players need to clear stages for more EXP to level up their Proficiency. 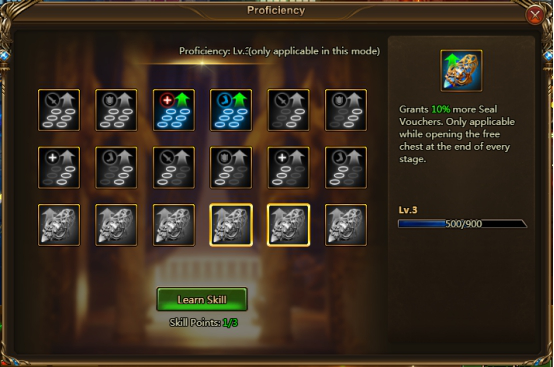 Details about the new items we mentioned above：
Seal Voucher: Can be used to exchange valuable resources like Relic Crystal, Red Jade, etc. from Seal Shop. Seal Core: Materials needed to Augment Seals. It can be obtained from Seal Shop or special events.
Seal Stone: Can be used to Engrave Seals.
Seal Shard: Can be used to Upgrade Seal Skills.

This Function provides players with a new way to strengthen their squad by cultivating each heroes’ Seals for more power and extra skills.
Requirement: Lv. 60 and above
Access: Click on ”Squad” and “Cultivate” buttons, then find the tab ”Seal” and “Seal Advancement” to cultivate their seals.

Each hero has a Seal which provides four attributes, namely, Agility, ATK, DEF, and HP. Players must use Seal Stones to engrave each Seal. Each Engrave will activate 1 of 4 seal parts and grant corresponding attribute bonuses. When each seal component has reached the maximum level of its current quality, it can be Augmented. 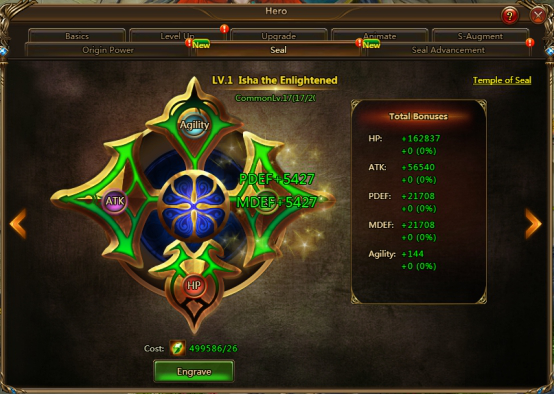 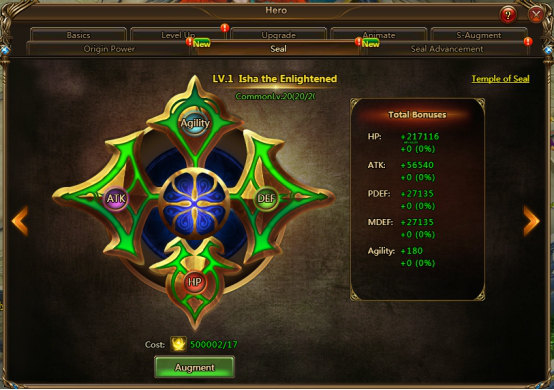 Note: If a seal component has reached the maximum level of its current quality, upon activating this component 95% of the cultivation materials will be returned. 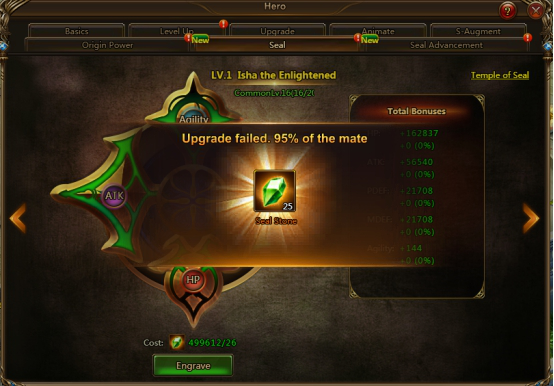 Each seal can be equipped with 1 skill, and each skill can only be equipped once. Players must collect Skill Points from Temple of Seal to unlock the skills. This Skill Points can only be obtained from First clearance of stage 1, 3, 5, 7, 9, 11, 13, 15. Different skills need specific Skills Points to activate. Each Upgrade will not only level up corresponding skill, but also greatly increase all attributes of the Seals. 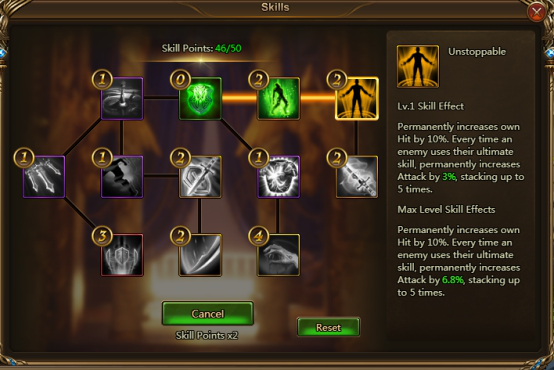 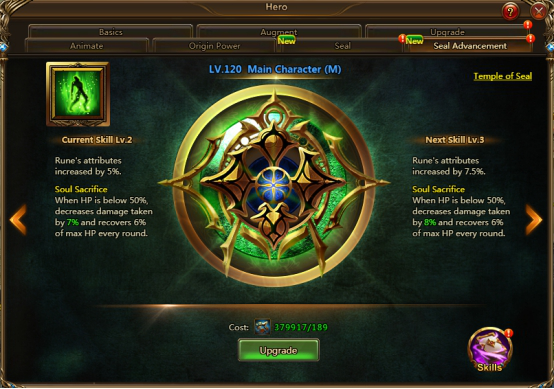 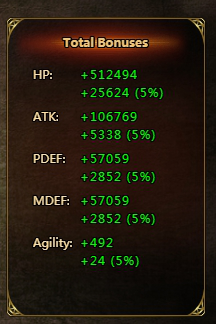 Are you up for the new challenge? Assemble your Heroes to conquer the Temple of Seal and harness immense power for your squad. Stay tuned for more great content coming to League of Angels II!

**Note: Please note that the above content might be adjusted due to changes of the development plan. Final updates will be determined in game.