Rising from the ashes, Sylvia dwells on the air and the earth, becoming a master of fire. Even in the midst of darkness, her consuming fire burns and dispels all evils. People call her the Scorner. The staff she holds is a protection for those who needs help, her presence and actions represent divine justice. Not even the bravest of Sapphire dared to offend her proteges. All evil forces trembled under her feet! Sylvia the Scorner, the embodiment of beauty, talent, power, and above of all, noble spirit, is joining the fray to fight in the name of the League of Angels II!

Joining the Celestial Faction as the new member, Sylvia the Scorner is an Artifact hero who will be wielding her devastating power of fire to aid you in overwhelming your opponents. Check out her detailed skills below:
Sylvia’s Skills (Max Level):
Crackling Flame: Deal (216%+70) DMG to the enemy back row and apply 1 stack of "Burn" effect; targets that already have the "Burn" effect on them will also be stunned for 1 turn; this skill replaces the basic attack.

Ardor Flame: Deal (307%+11440) DMG to the enemy back row and apply 1 stack of "Burn" effect; targets that already have the "Burn" effect on them will also be stunned for 1 turn; this skill replaces the basic attack.

Blazing Flame (Unlocks when Augment reaches level 4):
At the start of each turn, Sylvia has a 50% chance to dispel negative status effects on herself and any allies directly in front, behind, above, or below her; each status effect removed in this way will cause Sylvia to lose 1% or her max HP; this effect will not trigger if Sylvia does not have enough HP remaining.
Scorner (Prototype) (Unlocks when Augment reaches level 7):
Sylvia is immune to rage stealing and rage reduction effects.
Each time a unit dies, Sylvia's ATK and DEF will increase by 10%; this effect stacks up to 3 times and lasts until the end of battle.
Burn: Targets with the Burn effect will lose 10% max HP when they perform an action each turn. When Burn reaches 3 stacks on a target, it explodes to deal 15% of their max HP to the target and any units in front and behind them (the Burn effect disappears afterwards). The Burn effect ignores immunities, cannot be dispelled, and lasts until the end of battle. 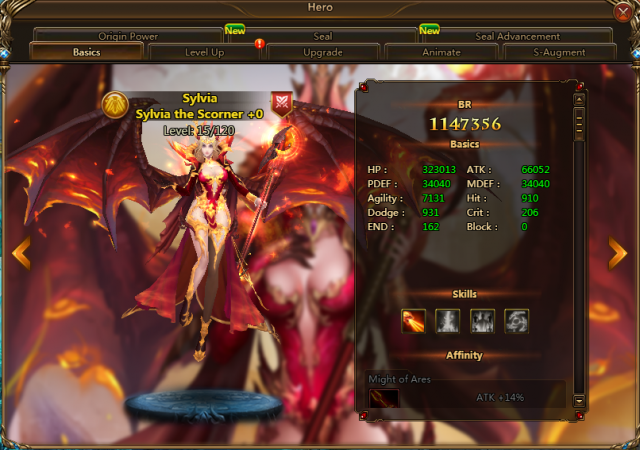 Sylvia the Scorner will make her debut in Cross- Server Resource Tycoon from Feb. 17th to Feb. 22nd. Collect as many tycoon points as you can for a chance to add her to your forces. Stay tuned for more great contents coming to League of Angels II.