Royal Kaiser, the king of the jungle, comes to League of Angels II to assist warriors in battle. It is hard to tame such a fierce animal, but brave warriors has never ceseased to tame it. Now it will show up in upcoming Angel's Fortune from Jan.  23rd to Jan. 25th. Let's take a closer look at this mount.

Royal Kaiser is an Artifact Grade mount. His Grace skill Aura of Kings can help gain Rage, and restore HP and ATK which will greatly boost the squad Battle Rating. 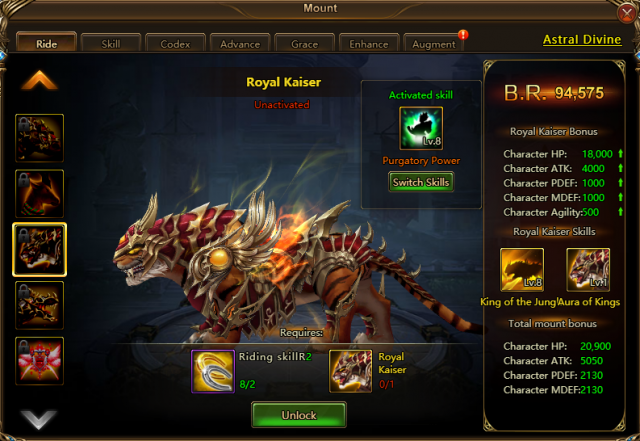 King of the Jungle (Max Level)

①. Starting from the 2nd round, gain 140 Rage when performing the first action each round;

②. Each time an enemy uses an Ultimate skill, restore 8.5% HP (can trigger 2 times per round at most);

③. Each time an ally uses an Ultimate skill, increase ATK by 5.2% until the end of the battle (can stack up to 5 times).