Celebrate the Second Anniversary of League of Angels II!

League of Angels II is going to have its second anniversary this month! To celebrate this memorable birthday with all our players and express our sincere gratitude for your company over the years, League of Angels II has prepared tons of exclusive rewards and FREE TITLE for all our players, as well as a month of carnival activities, including the release of new clothing, a special battle pet, and a powerful Artifact Hero! Welcome everyone to join the party in LOA II!

These amazing successes would not be possible if not for all our players’ continuous support and love. To nominate three most memorable achievement or update last year, the first is the introduction of X-Server Guilds, which boosts the power of all the 38621 active X-Server Guilds in Sapphire. Second is the release of the 7 new Artifact Heroes (one is on its way to come out this month) - as of now, players have claimed 15819 Artifact Heroes in total. Last but not least, Eternal War, the most popular game mode ever since its inception, has seen over 6,000,000 siege warfare broke out over the last year.

In the very first week in the Birthday Carnival, League of Angels II brings you a brand new Artifacts outfit – Spring Flower, which integrates peach blossoms in its design and intends to celebrate this most sweet birthday with all the players this spring. The outfit is composed of two parts - the clothing and the wings. Collect 1 part to activate 1 skill and 2 to activate both skills: 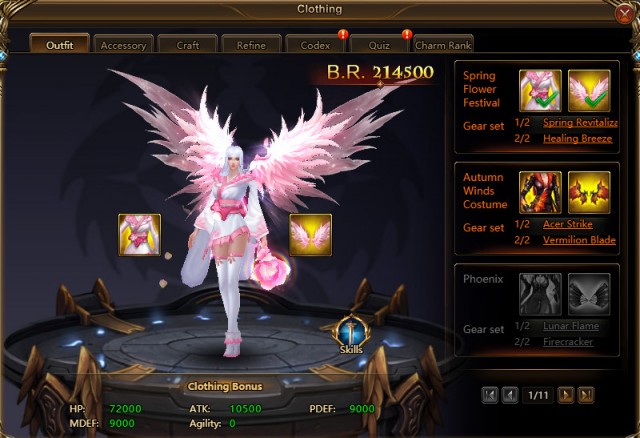 Spring Revitalization (normal skill):Restores (ATK×190%+710) HP and 200 Rage for the entire squad and grants them the rejuvenation effect: at the beginning of each round, restores 10% HP, lasting for 2 rounds.

Healing Breeze (ultimate skill):Restores (ATK×202%+7530) HP for two allies with the lowest HP, increases their DR by 10%, and grants them a shield with a 20% healing effect. The DR and shield effects last for 1 round.

This new outfit will be available in Hot Events from Apr 7th to Apr 11th, and in the meanwhile, LOA II will open another single-server Resource Tycoon to give players another chance to obtain the recently launched Soul Arm – Scorner!

While we are celebrating the second anniversary of LoA2, Mini Client's Points Store is rolling out super value gift packs for exchange. Second Anniversary Points Store will be open from Apr 7 to Apr 13, 2018!

Play games everyday on GTarcade Mini Client to receive a large amount of Points which can be used to exchange for great prizes.


The new artifact hero and special battle pet will be released in the coming weeks, please stay tuned for more detail on our official site and Facebook Page @LeagueOfAngels2. We at LOA II hope that all players will enjoy the coming Birthday Carnival and we are looking forward to share much more joy with all of you in the future!

Next：Enjoy the Best Easter Holiday in League of Angels II