New Mount Ruby Empress Take You to Roam in the Sea!

Do you want to dive into the sea to cool off from the summer heat? League of Angels II will bring a new mount Ruby Empress which can take you to travel in the sea. Ruby Empress is a goldfish not only has gorgeous appearance but also awesome ability to guard her master. Let's take a closer look at this mount.

Ruby Empress is an Artifact Grade mount. Her unique skill Sea's Blessing can give the entire squad a restoration effect and increase their ATK for 5 turns, which will help the squad win preemptive strike in battle. 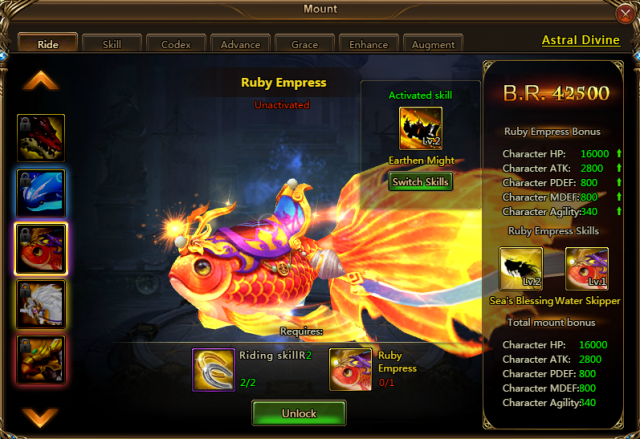 At the start of the battle, give the entire squad a restoration effect, healing 8.8% of target's max HP per turn and increasing their ATK by 19.5%，lasts 5 turns.

Water Skipper (Max Level)
At the start of the battle, increase own max HP by 14%, and Crit and Crit DMG by 5.88% until the end of the battle.

Participate in the upcoming Treasure Grab event from Aug. 12th to Aug. 14th and let Ruby Empress take you to travel in the sea this summer! Stay tuned for more great content coming to League of Angels II.