Heroes have become extremely powerful these days, but what about our Main Characters? Have they been left behind in the shadows? Worry not, League of Angels II’s new update introduces the Character Evolve feature to bring your main characters back into the spotlight! Now you can greatly enhance your Main Character’s attributes and skills through the power of evolution! 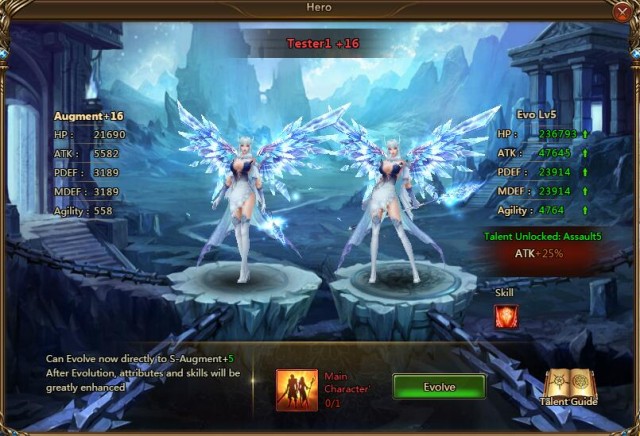 Your Main Character can now Evolve after reaching Augment+11, which will both enhance character attributes and skills! Enter the Hero interface and click on the main character and you will see the Evolve button. Players will need Evo Cores of their main character in order to evolve them. Main Character Evo Core can be obtained from Group Deal on Feb. 14th and Feb. 15th. Your main character can reach S-Augment +5 automatically after evolving. The higher the S-Augment level, the greater the main character’s BR will climb! More detailed information can be found in the Talent Guide. Warriors will need Souls or Primal Crystals to further augment their main character. You can finally strengthen your character and build the ultimate squad!

Next：League of Angels II Mythic Fox the Ambassador of Love