After being trapped in the Blasted Lands for hundreds of years, the legendary fiery dragon – Surturos has finally broken his chains and come back to the mainland.

Surturos has acquired the power of curse from the dark dungeon in the Blasted Lands. As a result, Surturos has the ability to reduce the combat power of your enemies dramatically. Now let’s see the skills of him in more detail: 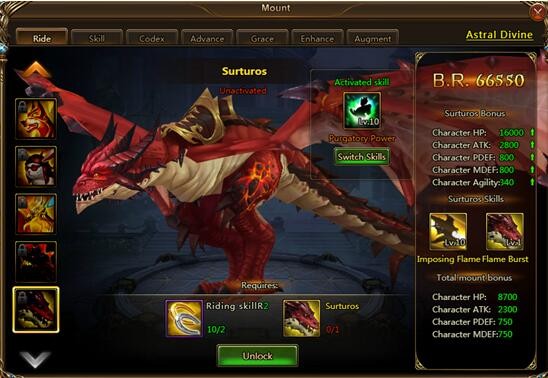 At the start of battle, reduce the ATK, DEF, and Dodge of all enemies by 17.5% until the end of the turn (this effect ignores immunities).

Flame Burst
Basic attacks and normal skills reduce the targets' DEF by 15% for 2 and 1 turn(s), respectively (stacks up to 2 times); basic attacks and normal skills also inflict the Burn debuff on targets, dealing 5% of their max HP for 1 turn (does not stack).
Surturos will be available in Treasure Grab from June. 21st to June. 23rd! Seize the chance to claim this fiery dragon and renewed the battle of glory in Sapphire! Enjoy the game!