The Angel's arrival delivered Sapphire from the flames of war, but their presence created some tension between the races. With the split of the Angel Empire and the Prime Evils at large, even the powerful Angels' fate is uncertain...

No one knows why the Angels left their 'Divine Planet', the Angels themselves kept quiet about it. What mattered to the people of Sapphire was that the Angels stopped the Abyssal Legion and wide spread was the fame of the 'Divine Edge'.

Berniced fused the Divine Flame from her homeworld into the heart of the tree and granted the tree ultimate protection and blessing. The withered tree came back to life, leaves spread to the sky and roots dug deep into the Earth with the Abyssal Leaders bound. The roots kept siphoning their powers, keeping them weak and turning their power into purified lifeforce. The World Tree became the source of magic for the Angels.

After the Abyssal War, humans once more ruled Sapphire, marginalizing the other races. The whole continent unified to form the“Divine Empire”and Angels were worshipped as gods. Angels spent a decade to form“Paramount”and made it their home. Bernice became the “Supreme Angel”.

After the Dark Lord incident, Moira's camp believe natives of Sapphire to be ignorant and in need of the Angel's guidance or rule so that conflict c an be avoided. Fortuna's camp took an opposing stand, they believe it was precisely because the Angels intervention that caused the conflicts. They believed that Angels should take the role of consultants.  Two entirely different philosophies eventually caused the“Divine Fissure”——Moira let her faction north forming Tempest Kingdom;Fortuna let her faction South West forming Celestial Kingdom. Athena was left with the rest of the Angels forming Midas Kingdom.Each governed separately, the Supreme Council overseas the 3 Empires. 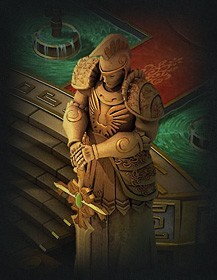 Consisting of powerful intellectuals, 'Celestials'is a group of Angels that guide the race's technological and cultural advancements.One of their priority is to make sure no Angel has an inter-racial child. There has been cases where such a child's unstable power caused catastrophes. This is exactly the purpose of the“SEED Regulatory Commission”which has the power to review and judge all Angels. 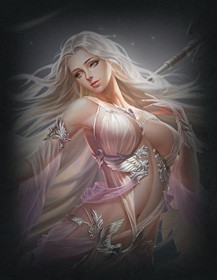 Fortuna have had the ability to see the future from a tender age, but it never brought her happiness. She saw the demise of her planet, but she was powerless to change fate.After the saw Tanya become the Dark Lord, Fortuna decided never to use her power of divination. After the fall of the Angel Empire, Fortuna decided to use her own powers to build a bright future for those she care about.