Not the oldest race on Sapphire, the humans have the most number. They have left the marks of civilization all across the land. At the same time, the iron steed of their knights have also flattened many lands. To the other races, the Human's bravery and intelligence is as well known as their untrustworthy personality.

Centuries ago, the two greatest Human Kingdoms, Freeman and Palmer ruled together in peace. People called the two kings the eternal suns. Manipulated by Hades, the Dragons from Hurricane Highlands assaulted human territory. After 100 years of war, the Humans drove back the Dragons and shattered the plan of Hades. Out of the ashes, a new Eternal Dynasty was born, ruling over Human, Elf and Orc lands.

50 years later, the Abyssal Tyrant led an alliance of Dragons and Orcs to attacked the Humans who have barely recovered from War. Making their final stand at the Eternal Kingdom, the Humans were delivered from their doom by the Angels. After 3 years, the Angels have turned the tides of war, helping the Humans unify the land to create the Divine Empire.

As a result, the Angels were worshipped as gods. They took up residence in Paramount, a home they made for themselves with Bernice as the Supreme Angel.

As time goes on, a divide took place amongst the Angels, especially their view on how to interact with natives of Sapphire. The Angel Empire eventually crumbled. 3 Angel leaders formed 3 separate Kingdoms with their own agenda. 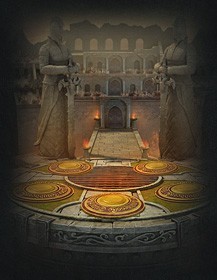 Created by General Boyle, answering only to the royal family is the Divine Legion.Formed by Augustine, representing all races of Sapphire is the Crescent Order.After the Dark Lord incident, Boyle was revived by the Angels. As a result him and his legion became the loyal guardian of Paramount.Another famous legion is the Rose Legion, a band of female kngihts led by Karen. Their duty was to guard the World Tree. 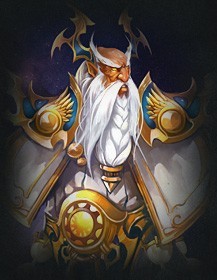 Founder of the Astral City, Gissing, an archmage is the most learned human. During the Chaos Wars, he used the Soul Shard of Hades in the Eternal Crown to confine Hades to the Nether Realm, helping the Humans win the war. As a price, Gissing was lost to the River of Time. He saw everything that ever happened since the creation of the world until he came before the Maker who made Gissing the Keeper of Time. He was supposed to keep a neutral stand on all occurances, until he saw the ultimate evil threatening to destroy Sapphire...