General Haru Shares How to Use Legion Weapon

Haru (S3), the Champion General in the 1st season of Eternal War, shares his ideas about how to use Legion Weapons! Let's check out what he said:

In Eternal War, players can use personal or Legion resources to build powerful Legion Weapons. Weapons will be stored in the Legion Weapon Depot and can be used during battle according to player's Legion status and Tech level. Weapons are highly effective at their roles! 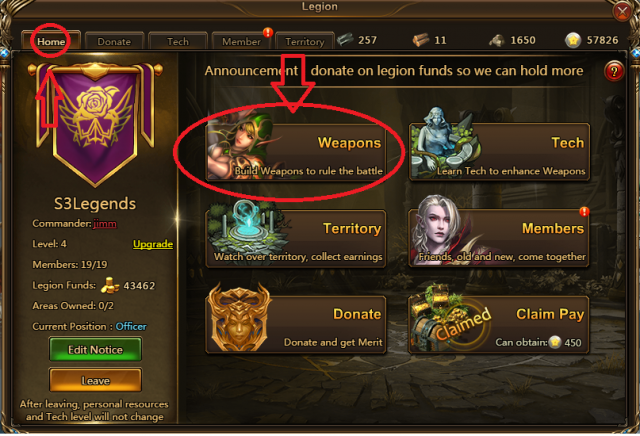 1.Shield (magic shield) is used to resist some damage from Eternal War weapons with a base of 5 charges and can be upgraded under player's tech.

Shield is mainly used to counter/attack Archer Towers. Without shield an Archer Tower can be killed by any players instantly.

Shield is best used by players with High BR, with 4-5 shielded mighty players an Archer Tower is good as dead!! Shield is the cost effective way to get rid of Archer Tower as long as you go in groups of 3-4 players with shield. Note that the shield only works against Eternal War weapons meaning regular player attacks ignores the shield protection you have and can attack you.

4. Landmine can be used anywhere inside the stronghold.

Landmines can be seen by the same faction and cannot be seen by other factions when in use. Landmines are versatile. It can be use on both offense and defense.

Landmine can instantly kill any player's who step into it. It is best to place a Landmine in front of barracks and Archer Tower for defense. A Landmine has 4 hours duration only, so best use during all out war. Low BR can effectively use Landmine to waste High BR players’ time and lower their morale by making them chase you and luring them to the Landmine you've set up. Upgrade Landmine on tech for best result!


7. Fireball - can only be use by a Commander of a legion or a General of a faction. Use to target and kill any players with the exception of the Commanders and the General. It can be upgraded on the tech upgrade to kill more than one player per square. A Fireball in the hands of a good General can be deadly and can turn the tides of battle during the war. A General can kill any players using Fireball including the Commanders with the exception of the other Generals of the opposite factions. It can be used to clear the way to make the Blast Giants more effective!! A Commander or a General without a Fireball is like having a gun without a bullet!! Make a Fireball or two for your Commander to use during war times.