Strictly speaking, the Orcs is not a single race. Before the Plague Queen, the Orcs have creatures of different forms and looks living in separate tribes. Only a cruel destiny drove them together...

Orcs originally referred to the collection of tribes to the South-West of the Continent each with a different culture, religion and history.Famous tribes are the Bonecrushers,the Blood Lions and the mysterious Dhyana. Before the Chaos Wars, the tribes rarely communicated with each other. Living off the land was enough to sustain individual tribes.

Chaos Wars changed the lives of the Orcs forever. They were forced to join the evil Ulysses and attack the Humans and Elves.Ending in defeat, the war impoverished the Orcs, leaving them defenceless in face of the 'New World Project'. They were to be slaves to the Elves for a decade.

Under bloody Elven rule, the once scattered Orcs began to unite. The strongest tribe, the Bonecrushers led by the Plague Queen made a dark deal with the Abyssal Tyrant. Together they poisoned the water source with Hydra Blood, turning the Orcs berserk.Immediately, the Orcs fought back against the Elves. Almost overnight, the complacent Elves were defeated. Those few who survived took refuge among the Humans.So fell the Elven civilization.

But the pain of the Orcs did not end. As a price for regaining freedom, the Plague Queen and her followers became puppets of the Abyssal Tyrant. Some are bound in the World Tree, while others hide in the deepest forests trying to live day to day... 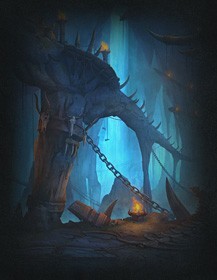 The Blood Lion tribe is one of the few Orc tribes not controlled by the Plague Queen. Young leader of the Blood Lions, Bach is a fearless warrior. Despite being taught from a young age to be patient and favor brain over brawn, Bach has alway s felt something deep inside trying to break out.The arrival of Pamela freed Bach from his restraints, learning to control his desire and beastly nature, he gained great strength and became the 'Beast King', fighting for a brighter future for the Orcs. 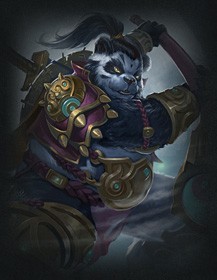 Since the beginning of time the Dhyana has lived in Lost Forest to the East of Sapphire. Hermits that follow the Zen and try to become one with the heavens, they have never participated in war. Their home, the 'Hanging Island' is impossible to find. Only 3 outsiders have ever been there. The Black Dragon Prince was first, Theresa came second and a third visitor whose identity is hidden. But the third visitor changed everything, it was after this visit that the Dhyana sent 7 of their best warriors to join the League of Angels...